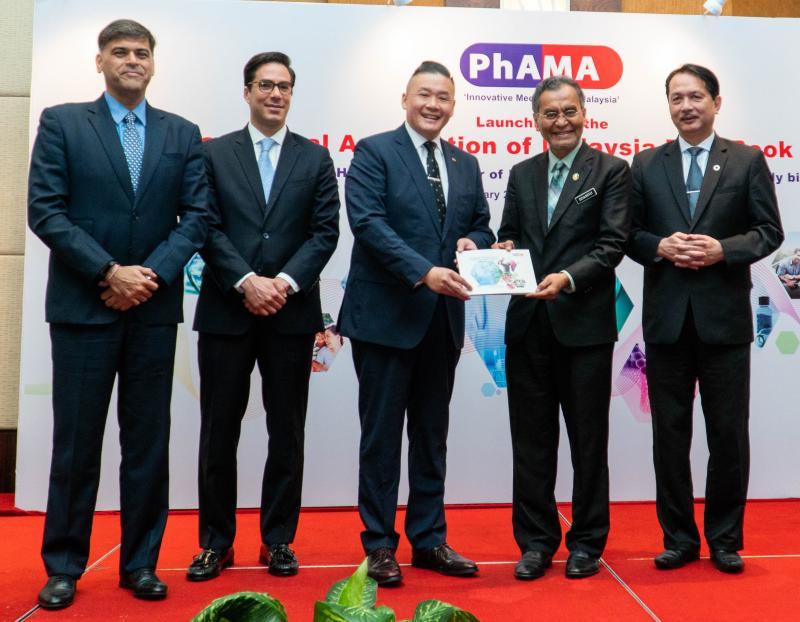 As of the third quarter of 2018, the Malaysian pharmaceutical industry attained a total estimated market value of RM7.5 billion, say industry experts.

According to data compiled in the new 2018 edition of the Pharmaceutical Association of Malaysia (PhAMA) Industry Fact Book, this figure represents an average growth rate of 8 to 10 percent per year over the last decade and combines the total sales of originator medicines (55 percent), generics (21 percent) and over-the-counter products (24 percent).

“The industry’s growth is reliant on the efforts of all stakeholders and has positive ripple effects on the rest of the economy,” said Chin Keat Chyuan, president of PhAMA and managing director of Johnson & Johnson Malaysia. He added that the country’s pharmaceutical industry now comprised over 445 companies, including large multinationals.

Key factors fuelling the growth of the industry include increasing health literacy and rising disposable incomes amidst an increasingly ageing population; the percentage of adults aged 65 and above rose from 3.9 percent to 5.1 percent between 2000 and 2015.

Increasing urbanization has also seen a corresponding rise of noncommunicable diseases such as diabetes mellitus, hypertension and hypercholesterolaemia among adults aged 18 years and above, along with a host of related medical conditions.

Dzulkefly added that collaborative efforts between various stakeholders in healthcare should not only aim to improve delivery of quality services to all Malaysians, but also positively contribute to the country’s economy through a thriving healthcare industry.

Among examples of collaborative efforts cited were the Patient Assistance Programs offered by 10 PhAMA member companies between 2013 to 2016 to the benefit of over 12,000 patients, as well as the commencement of the Patient Access Scheme (PASc) from May 2018.

He emphasized that the Ministry of Health would always place the utmost emphasis on supporting national primary healthcare services for all citizens through its resource allocation, with the ministry’s budgetary allocation remaining focused on building integrated health facilities across the country.

Both Dzulkefly and Chin were speaking at the official launch of the PhAMA 2018 Industry Fact Book held recently in Putrajaya.

At the same event, Chin highlighted the increased engagement of the industry with local research organizations in industry sponsored research (ISR), noting that 1,110 ISRs had been conducted in Malaysia between 2012 and 2017—exceeding the Ministry of Health’s target figure of 1,000 ISRs by 2020.

“This has further translated into the creation of over 1,900 skilled jobs in 2017, and an excess of RM240 million added to the gross national income (GNI) since 2012,” said Chin.

In turn, Dzulkefly pledged to support further investments in research and development by the pharmaceutical industry by the establishment of proper regulatory frameworks which would facilitate growth and expansion thereof.- MIMS 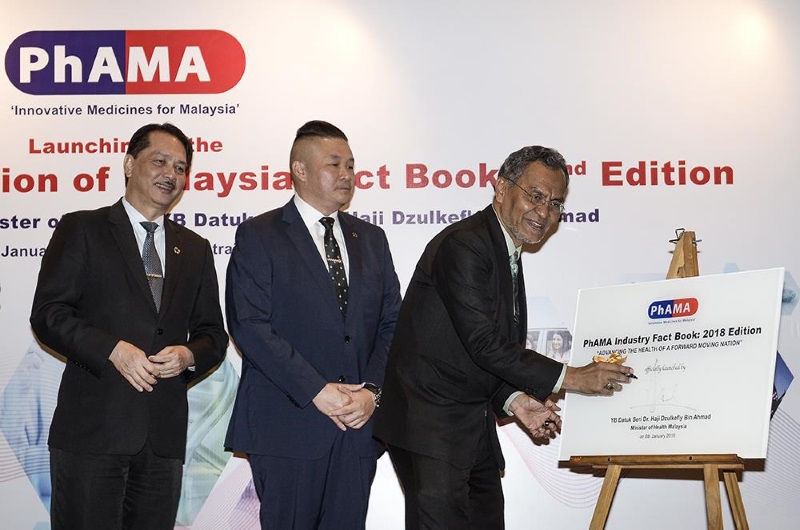 PUTRAJAYA, Jan 9 - A pharmaceutical group has urged the government to look at other factors like clinical needs in the procurement of medicines, instead of focusing solely on price.

The Pharmaceutical Association of Malaysia (PhAMA) said the Health Ministry should use other methods besides reference pricing so that it can achieve cost savings and safeguard access to medicines at the same time.

“While MoH has a Drug Formulary Listing, the range of availability and the uptake of drugs in the public sector remain limited,” PhAMA said, referring to the Health Ministry, in its Advancing the Health of a Forward Moving Nation 2018 industry fact book that was launched here yesterday.

“Surveys have found that Malaysians’ access to innovative medicines was consistently lower than those of Koreans and Taiwanese.”

PhAMA pointed out that according to 2014 data, only 0.4 per cent of patients in Malaysia had access to a treatment for Type 2 diabetes called DPP-IV inhibitors, much lower than 9.8 per cent and 10.8 per cent for patients in Korea and Taiwan respectively.

Only 0.21 per cent of Malaysian patients had access to biological therapies for rheumatoid arthritis, compared to 4.92 per cent in Korea and 9.2 per cent in Taiwan.

“PhAMA believes that a mutual goal of providing equitable and sustainable access to innovative medicines would be of tremendous advantage to the public, the government, and other relevant stakeholders. 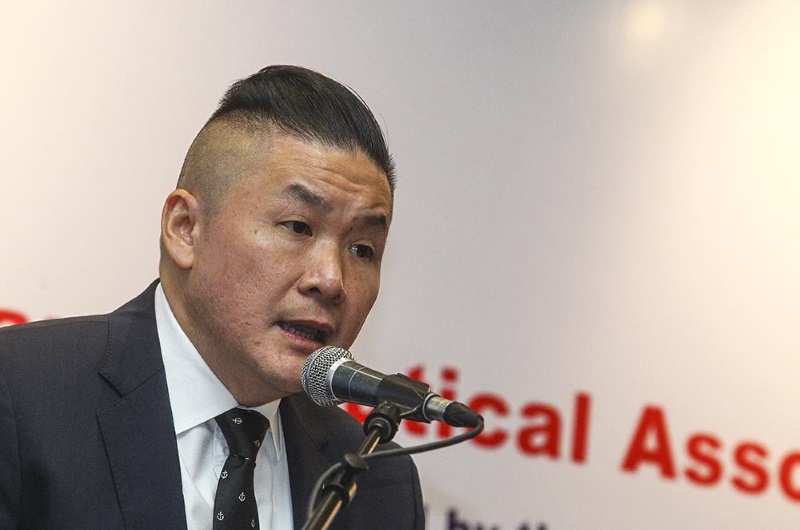 President of Pharmaceutical Association of Malaysia Chin Keat Chyuan speaks during the launch of the PhaMA Industry Fact Book in Putrajaya January 8, 2019. - Picture by Miera Zulyana

“The institution of a united network of stakeholders to work towards this goal, utilising a multi-criteria decision analysis (MCDA) model, to increase transparency and predictability of decisions, is thus recommended,” said PhAMA.

MCDA uses multiple criteria in healthcare decision-making, instead of using a single factor like cost effectiveness.

PhAMA previously noted in a 2016 paper on value pricing that many innovative medicines have not been listed on the national formulary — which lists the medicines provided in MOH hospitals here — in the last few years, claiming that this has led to high out-of-pocket (OOP) costs for patients.

The association said in its fact book that 40 per cent of an average person’s total healthcare expenditure in 2016 in Malaysia comprised OOP payments.

“Interestingly, the pricing of medicines in Malaysia are, in fact, not significantly higher than that of our neighbouring countries, even when branded innovative medicines in high-cost therapeutic areas such as oncology is taken into consideration,” PhAMA added.

Malaysia only spent 4.2 per cent of its gross domestic product on total health expenditure in 2014 (2.3 per cent was on public healthcare), well below the average of 6.2 per cent in upper-middle income countries. But the Pakatan Harapan government increased the health care budget to RM29 billion for Budget 2019, up by 7.8 per cent from the previous year.

PhAMA also said in its factbook that its member companies were expected to introduce 156 prescription-only medicines between 2017 and 2022, with cancer treatments topping the list.

“As Malaysia continues to see a rising prevalence of cancer, PhAMA members are responding proactively by increasing the public’s accessibility to innovative cancer medicines, as demonstrated by the number of anticancer agents introduced into the country,” said PhAMA.

Twenty-four anticancer agents will be launched between 2017 and 2022. 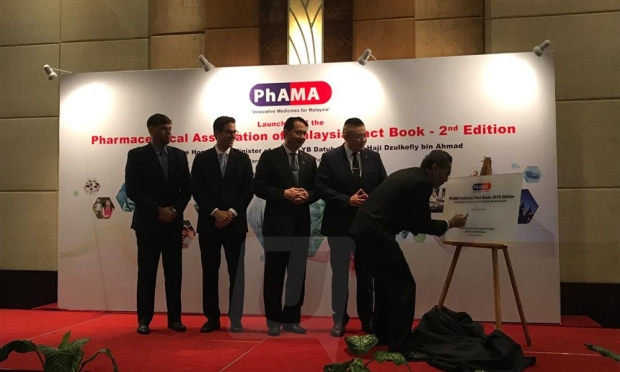 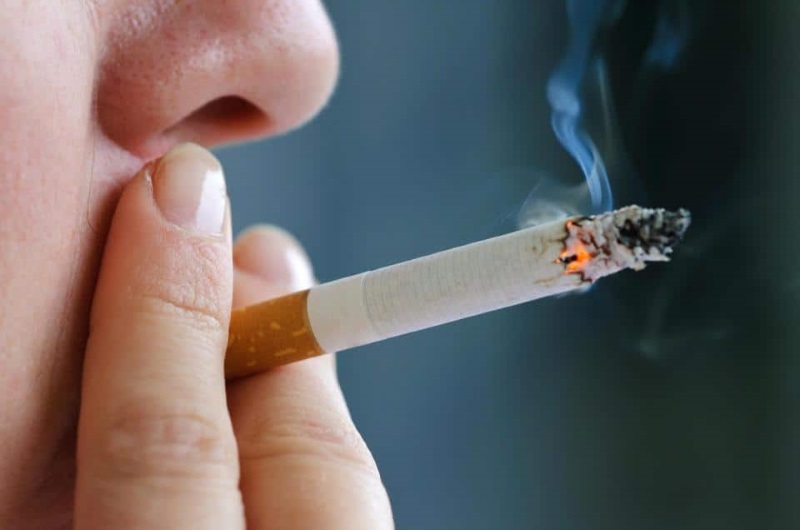 He said this was in accordance with the Health Ministry’s focus to protect non-smokers’ rights as they represent about 80 per cent of the public.

“The Health Ministry’s agenda is to focus on healthy environment for the non-smokers. Smokers can continue but they have to respect the rights of non-smokers,” he told reporters after the launch of the Pharmaceutical Association of Malaysia (PhAMA) Industry Fact Book: 2018 Edition by Health Minister Datuk Seri Dr Dzulkefly Ahmad here yesterday.

The Ministry imposed a smoking ban in Parliament followed by eateries beginning this year under Regulation 11 of the Control of Tobacco Product Regulations (Amendments) 2018. After eateries, the Ministry is also considering introducing smoking ban at launderettes and hotels.

During the first six months of the smoking ban at eateries, Health Ministry enforcement personnel will not issue compounds but will only issue warning letters. After the six-month period, anyone found guilty of the offence can be fined up to RM10,000 or jailed up to two years.

PhAMA president Chin Keat Chyuan in his speech said the second edition of the PhAMA industry fact book provides greater insights into the nation’s pharmaceutical industry’s current landscape, and contains highlights from the association as well as individual member companies and their efforts in addressing new health-related trends and challenges facing Malaysia.

He said that 800 of the premises did not display signs on the smoking ban.

He added that a total of 1,604 eateries were screened to ensure compliance with the ban. - Bernama